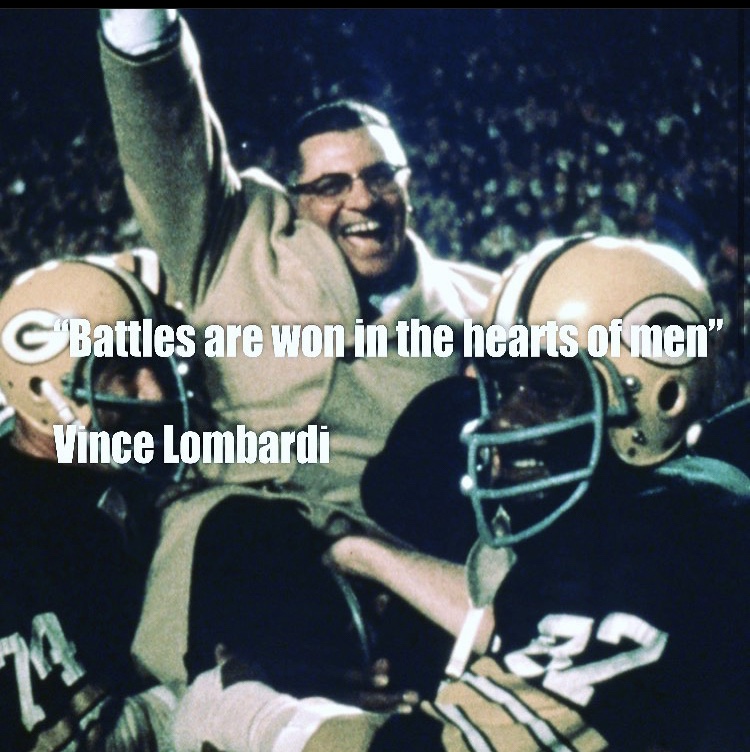 Categories:EmotionPhilosophypsychologySocial
by Hessel |
on mei 1, 2019

My father used to say “there is nothing as changeable as a person”. I did not yet understand what he meant by that. The chaos in my adolescent brain kept distracting me. Now that I am a little older and, at times I think I have found some form of structure, something changes in my environment. Sometimes I go with certain fads. Can I start over again. For example, people who have a family know what I mean. For my work I am also always looking for tools that can help me to get the structure that seems to help others so well. I once read the biography of the famous American football coach Vince Lombardi. He was born on June 11, 1913 in Brooklyn, New York. As the son of an Italian immigrant, Vince grew up in a Catholic family. In 1928, at the age of 15, he went to study for a priest. After two years, he realized he had not been called to swing a censer. He decided to study elsewhere and went to St. Francis College. There he went on to play in the football team as a fullback. After graduation, Vince went to live at Fordham University and also played on the football team there, joining the acclaimed Fordham’s “Seven Blocks of Granite”. This was the strongest attacking team in American football history for years. Lombardi graduated from Fordham in 1937 with magna cum laude. He made the decision to take up an assistant trainer position at St. Cecilia High School in Englewood, New Jersey. During the eight years on St. Cecelia, Vince married Marie Planitz in 1940 and they had two children.

Simplicity and execution
In 1947, Lombardi joined the coaching staff at Fordham University. In 1949, Lombardi had the opportunity to continue his coaching career with the military team at West Point. Vince saw it as a great challenge to become an assistant to Earl Henry Blaik, also known as Red Blaik. He could not resist learning under the guidance of the famous “Red” Blaik. During this period Vince developed his famous “success formula”, simplicity and execution. He developed a well-known reputation as a tireless coach. This feature brought him to the position of assistant coach for the New York Giants in the National Football League (NFL). Over the five years with the Giants, Lombardi helped the team through five winning seasons, culminating in the championship in 1956.

Training, training, making mistakes does not matter
Lombardi then went on to become head coach and signed a five-year deal with the Green Bay Packers in January 1959. He organized intensive grueling training camps and demanded absolute dedication and effort from his players. Lombardi’s tough and disciplined style turned the Packers’ most successful year in 1960, winning five NFL championships, including Super Bowl 1 and 2 victories. Lombardi earned the title of greatest football coach in history. After a two-year hiatus, Lombardi went back in 1969 to lead the Washington Redskins. This immediately led to their first winning season in over a decade! It all seems very positive, but of course the Lombardi teams also lost matches. Mistakes were made during crucial games. But the mistakes were compensated by a special team spirit.

Homerun Vince Lombardi
Unfortunately, a serious form of colon cancer was diagnosed in Lombardi in 1970. Vince Lombardi died a short time later on September 3, 1970 at the age of 57. He made, as it were, his last ‘Homerun’. Vince Lombardi had become a well-loved and national icon. Thousands of people attended the two separate funerals. Shortly after his death, Lombardi was inducted into the Pro Football Hall of Fame. Every year, his name is honored by presenting the Vince Lombardi trophy to the Super Bowl Champion.

The New management
The methods of coaches who have achieved legendary successes are very cautiously entering the business world. Fortunately, because its approach gives the business community more inspiration and nutrition to grow. Managers could learn more from sports coaches because they naturally have a special way of communicating. The pitfall that managers create for themselves is a wrong way of communicating and a variety of rules to secure their own position. As long as a lot of money is being made, no one will make a fuss. However, the people on which the company depends depend on the first crisis immediately. The new management is far from being applied in every company. There are still millions of companies that work the old way. Managers stop this from their holy houses and should be ashamed of it. Growth comes from learning from others and being open to collaboration and communication.

Lessons on change
Vince Lombardi’s approach is based on simplicity and execution. That simple appeals to me, but then it comes down to the implementation. If only everything were so simple that we didn’t have to do it. Lombardi was not concerned with the result in the first place. No convulsive focus on achieving success. Success was the logical consequence of the changes. Lombardi did not train to win. That sounds strange, but he was not tempted by the two paradoxes ‘profit’ and ‘loss’. He worked on the intrinsic values ​​of the players and the question “why they were football players”. Simon Sinek’s (simple) Golden Circle was not yet known at the time, but it is an eye-opener. Lombardi’s approach was based on a mix of disciplined, servant and devoted leadership. I think change has partly to do with the way of approaching. In the various articles about Lombardi’s life and work I have discovered some essential things that have led to their many championships;

Changing the culture in the team and the organization
Mapping values ​​that make up the culture
Determine behaviors that represent the values
Expressing values ​​and behavior
Repeat all the above points daily
I am not a doctor but the above points are not just like a prescription, it is about mentality and identity. Working with mentality and identity on a daily basis is a difficult ‘job’. Discipline and structure are things for me that I may never have control over. People who recognize themselves in this should not be sad, we have science on our side. You don’t change something in a weekend retreat. But it is also not something that you do by talking ‘pleasantly’ about it. Vince Lombardi had to work hard to transform the culture of a losing football team into a culture of champions. The Packers’ change process proves that people are “not of granite.” People can change. Positive and unfortunately also negative. But for some things, we just shouldn’t expect change. It is not necessary because you know that it is just right. My father was a fan of Ajax. Now I get that.